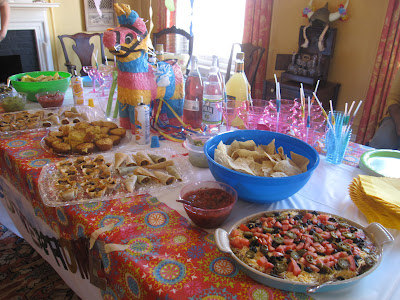 "We're hosting a surprise party with a tacky Fiesta theme, and were wondering if you could provide the desserts?" This wasn't a total game changer for me; I often find unique solace in tackiness - an inflatable moose is my idea of appropriate living room decor (Thank God I have a roommate with a sense of humor). My office was planning a going-away party for a beloved coworker; an individual with an impeccable sense of fashion and a knack for assembling classy gatherings. Thus, a tacky Fiesta was born: glittery palm trees, margaritas in plastic glasses, and paper mache piñatas made for a gathering that was everything but classy. I had two options: embrace the tacky and assemble cupcakes with marshmallow sombreros, or feature the unique flavors and spices of Mexican fare. While the former was highly tempting, I decided desserts that placed quality above frivolity would have a more lasting impact...but marshmallow sombreros would be cute, as a future project... 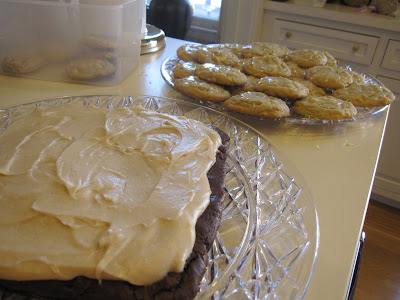 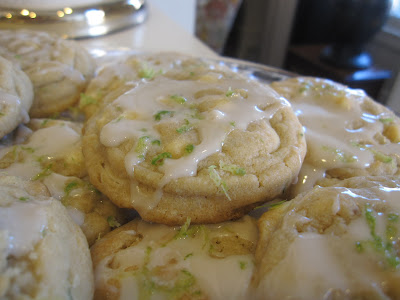 I had used lime in baking number of times before, most notably in Key Lime Pie and 7-Up Pound Cake (lemon-lime flavored). Both recipes demonstrated lime's efficacy to balance the intensely sweet flavor of these desserts with a citrusy edge. They were also desserts in my upper echelon Unfortunately, neither would make for an easily dividable dessert, so I was back at square one. 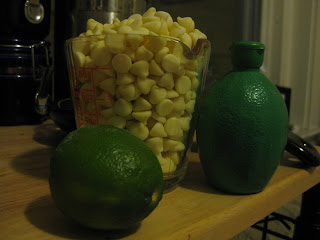 I then chose to do what any baker would: check the pantry and see what's already there. The answer proved to be just what I was looking for: white chocolate chips. From my experience, white chocolate always produces a much sweeter result than its darker counterpart, so the lime would pair quite beautifully. As for making it party-friendly, cookies were the easy answer. The original recipe calls for just the cookies; I added the glaze to give them a more festive appearance. Either way you choose, they are delicious! I baked these the day before and sealed them in an airtight container, then glazed them at the party itself. Enjoy! 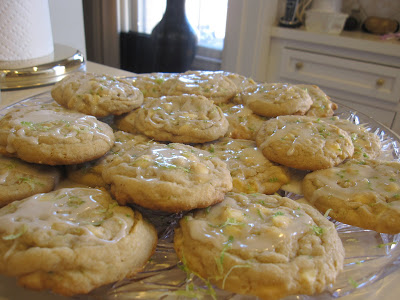 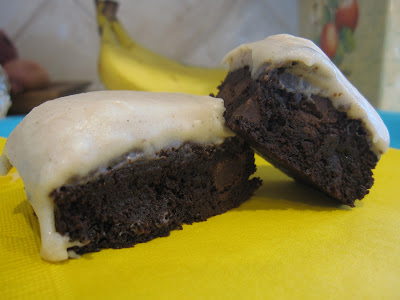 So chocolate and chili it was, but I needed this to accommodate a crowd - churros and dipping chocolate would be a disastrous mess. My own OCD nixed the idea of cookies (I needed a contrast from the former recipe), but still wanted the bite-sized appeal. Funny thing, I had leftover cream cheese frosting from the Red Velvet Cupcakes I had made earlier that week - the idea of frosted chocolate led me to my answer: brownies.

This recipe calls for three different spices: cinnamon, chili powder AND cayenne! While that sounds insane, the spices add more depth than spicy pain. One coworker, who claimed she hates spicy food, enjoyed them so much she went for seconds! I included original recipe for the frosting, just in case you who don't happen to have leftover frosting on hand...I just added cinnamon and a few tablespoons of milk to mine.  So that's it in a nutshell; maybe one day I'll settle for baking your standard chocolate chip cookies for events like this...maybe. 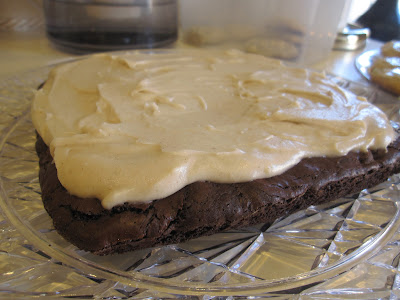 Mexican Hot Chocolate Brownies with Cinnamon Cream Cheese Frosting
Adapted from BridezillaBakes.com
Yields: 16 larger or 24 smaller brownies
Ingredients
Hot Chocolate Brownies:
▪ ½  cup all-purpose flour
▪ 1 ½ teaspoon ground cinnamon
▪ ¾ teaspoon chili powder
▪ ½ teaspoon cayenne pepper
▪ 10 tablespoons unsalted butter
▪ 1 ¼ cups sugar
▪ ¾  cup plus 2 tbsp unsweetened cocoa powder (I used Dutch-process)
▪ ¼ teaspoon salt
▪ ½  teaspoon pure vanilla extract
▪ 2 large eggs, cold
▪ 2/3 cup chocolate chips (optional)
Cinnamon Cream Cheese Frosting:
▪ 4 oz cream cheese, softened
▪ 3 tbsp unsalted butter, softened
▪ 1/4 teaspoon pure vanilla extract
▪ 1 cup confectioners sugar (more if needed)
▪ 2 teaspoons cinnamon
Directions:
For brownies: Position a rack in the lower third of the oven and preheat the oven to 325°F. Line the bottom and sides of an 8×8-inch square baking pan with foil, leaving an overhang on two opposite sides. Whisk together flour and spices; set aside.
Combine the butter, sugar, cocoa, and salt in a medium heatproof bowl and set the bowl above a saucepan holding about and inch of barely simmering water. Stir from time to time until the butter is melted and the mixture is smooth and hot enough that you want to remove your finger fairly quickly after dipping it in to test. (Anne note: this takes quite a while, it took me about 8 minutes to get a fully melted result). Remove the bowl from the saucepan and set aside briefly until the mixture is only warm, not hot. It looks gritty at this point, but don’t worry — it smoothes out once the eggs and flour are added.
Stir in the vanilla with a wooden spoon. Add the eggs one at a time, stirring vigorously after each one. When the batter looks thick, shiny, and well blended, add the flour and spice mixture and stir until you cannot see them any longer, then beat vigorously for 40 strokes with the wooden spoon or a rubber spatula (it’s thick at this point, just keep stirring…). Fold in the chocolate chips, if using. Spread evenly in the lined pan.
Bake until a toothpick plunged into the center emerges slightly moist with batter, 20 to 25 minutes. Let cool completely on a rack before frosting.
For frosting: Beat cream cheese, butter, and vanilla with an electric mixer at high speed until fluffy. Sift confectioners sugar and cinnamon over cream cheese mixture, then beat at medium speed until incorporated. If the frosting is too thick, you can add warm water, a tablespoon at a time, until it’s the right texture. If the frosting is too thin, add more powdered sugar, a ¼ cup at a time, until it’s thick enough.
When the brownies are cool, lift up the ends of the foil liner, and transfer the brownies to a cutting board. Spread frosting over top of cooled brownies. Cut into 16 or 24 squares.
Posted by Anne Gregory at 1:45 PM