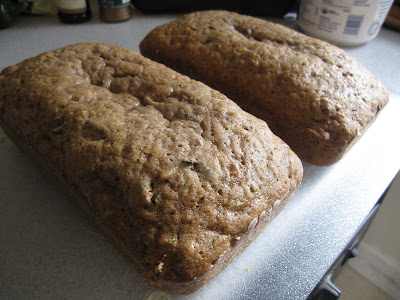 One of my favorite locations in Boston is the North End, for three reasons: 1) Little Italy, 2) Quincy Market, and 3) Farmer's Market. THe latter of these is arguable my favorite, considering it has saved me hundreds on fresh produce. Sometimes, though, you get more than you bargained for and end up having a fridge full of produce that you have no chance of finishing before it goes bad. One such example is from my most recent trip to the market, where I purchased 2 enormous zucchini. The solution? Bake with it, and 'tis the season for sweet spiced breads (i.e. pumpkin, sweet potato, etc). 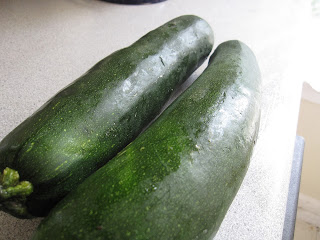 The phrase "zucchini makes a healthier bread" was precisely the belief of American households in the 1960s, when the recipe first became popular (according to Jean Anderson, author of The American Century Cookbook). It was also believed that baking with oil rather than butter was better for you, and thus quick breads like this one became extremely popular. Granted, zucchini bread is not usually frosted (like other sweet breads), and it employs fresh zucchini, but it is by no means a "healthier" food. 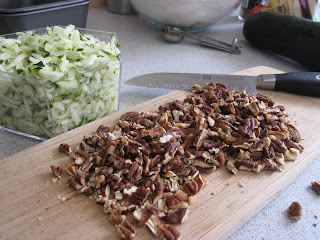 The recipe for zucchini bread descends from a long line of European sweet vegetable desserts, such as my previous entry on Carrot Cake. Unlike carrots, though, the flavor of zucchini cannot take credit for the bread's overall taste. It is more the fibrous delicacy of the vegetable that creates a beautiful, moist texture. This is why it is ill-advised to pat the shredded zucchini dry, which some recipes call for. This recipe requires no electronic mixer (regardless of how much I adore my KitchenAid), and can be in the oven in less than 15 minutes. One word of caution: this recipe calls for a baking time of 60 minutes, though I would recommend testing the bread for doneness after 40 minutes. I only used pecans in my bread, though a number of add-ins are possible for this recipe (see below). 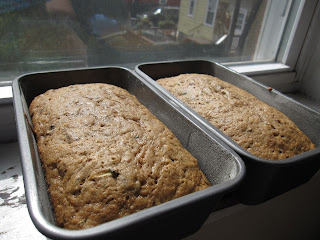 Posted by Anne Gregory at 6:08 AM No comments:

Nutella: The Way To Anyone's Heart 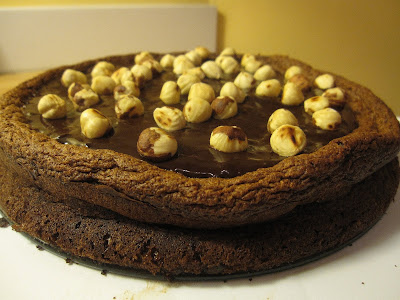 I can attribute the prolonged absence from my blogging duties to a single anathema: MOVING. Having relocated my entire existence 3 times in the past 4 months, there is no other term for the process. Nonetheless, the new place is AMAZING, and I finally have a kitchen that caters to my every baking desire. Space (finally, it's not a closet!), a gas oven/stovetop, a functional refrigerator, an enormous pantry, and more have all made the horrors of moving more than worth it.

But I imagine this information all seems irrelevant considering you read "nutella" in the title. The thought of a smooth, chocolate-hazelnut spread can render even the strongest helpless. It is one of those ingredients that cannot be duplicated (another excellent example being Bailey's). I had been studying a number of recipes that incorporate the spread in hopes of finding one whose flavor profile was contingent on the actual ingredient, rather than just using it as a complement (i.e. chocolate cake with nutella frosting, or cheesecake with nutella swirl...but the later does sound intriguing come to think of it...). It was then I came across Nigella Lawson's Nutella Cake with Chocolate Hazelnut Ganache.

I am composing this entry before my lunch break, a regrettable oversight considering I can now think of nothing else but nutella. This cake is no ordinary chocolate cake, how can it be? The recipe calls for all the usual suspects of a flourless chocolate cake: one stick of butter, eggs, and melted chocolate. But the difference lies in the absence of  sugar and the separation of the eggs (yolks versus whites). The former is obvious: why add more sugar if you have already added an entire container of nutella to the batter? The latter can be explained accordingly: the whites, having been whipped upon separation, prevent the prospects of dense, heavy cake (the reason we all love nutella on its own, though).


Directions:For Cake: Preheat oven to 350 degrees; butter a 9-inch springform pan. In a large bowl (preferably metal), whisk the egg whites and salt until stiff. In another bowl, cream the butter and Nutella, then add the rum, egg yolks, and ground hazelnuts. Fold in melted chocolate. Add a blob of beaten egg whites to the chocolate batter, and mix gently until well-combined. Fold in the remaining whites, one-third at a time, very gently but thoroughly. Pour into springform and bake for 40 minutes (my cake only took about 35 minutes; check after 30 just to be safe). Test for doneness by inserting tester, which should come out mostly clean; lightly pressing finger into top to check for a slight bouncing-back; and observing edges beginning to separate from pan. Let cool completely, in pan, on a rack.

Toast the hazelnuts in a dry skillet, or toaster oven shaking them around frequently. Do it for about 4 minutes, or until they are lightly browned, then let cool completely. If hazelnuts came with skins on, put them in a towel after toasting and rub around; this will remove most of the skins.


For Glaze: Chop chocolate, and add to sauce pan with half and half and rum over medium-low heat. Once chocolate is melted and components are combined, whisk until mixture reaches desired thickness, then cool. Remove rim of cake pan and pour cooled ganache over, spreading lightly to create a smooth, shiny surface, and apply hazelnuts all over. 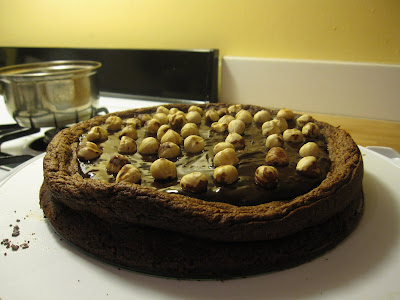 Posted by Anne Gregory at 9:00 PM No comments: