A Tale of Two Cheesecakes

Cheesecake has and always will hold a certain sentimental value for me. To this day, it’s the one dessert that no one can make “better than mom”. The simplicity of her cake is unbeatable: a textured graham cracker crust with a thin layer of chocolate, filled with a creamy, beautifully balanced layer of cream cheese. No additional flavoring was ever needed, and the cake always came out of the oven absolutely perfect. This compelled me to perfect the cheesecake, and one might say it’s something of a specialty of mine now. I’ve baked a number of decadent cheesecakes, from creamy Dulce de Leche Cheesecake Squares to a realization of the Cheesecake Factory’s famous Red Velvet Cheesecake with Cream Cheese Frosting. As mentioned in my last post, I had mistaken the day for the actual December Birthday Celebration in my office and accidentally brought in two bundt cakes, so I needed to find two new recipes. What better way to celebrate my birthday month than to make a cheesecake? In honor of the holiday season, I settled on two luxuriously festive cheesecakes: Rich Kahlua Cheesecake with Chocolate Ganache Topping and Whipped Cream, and Spiked Eggnog Cheesecake with Sour Cream Topping and Caramel Sauce. This blog post is dedicated to my Mom considering she, to this day, is the queen of the simple cheesecake. 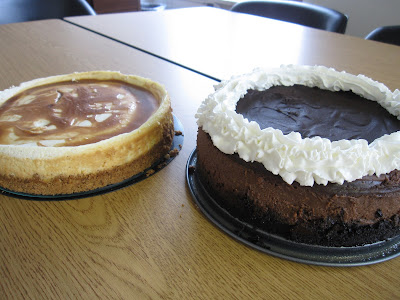 A closet nerd, I thought I would share the when and where of cheesecake. According to Wikipedia, it was served to the athletes of the first Olympic Games of Greece in 776 B.C, yet cheese molds have been discovered dating back to as far as 2000 B.C! Written accounts of these times describe cakes with similar results to those of modern cheesecakes. Talk about a traditional dessert! Cream cheese itself came into creation through the infallible method of innovation: by accident. A New York dairyman named William Lawrence accidentally created cream cheese in a failed attempt of making French Neufchâtel: a soft, unripened cheese from Normandy. Lawrence’s “invention” was distributed in tin foil wrapping under what would become a household name: Philadelphia Cream Cheese.

So enough on the history lesson, let’s talk about these cakes! The idea stemmed from my desire to use the Kahlua I have left over from a Big Lebowski night I hosted (White Russians, a classic from the film, use very little). When it comes to sweeter liquors, I tend to lean towards cheesecake given both the flavor and texture it can lend to the final product. Bailey’s is a classic, but coffee liquor is a close second when it comes to dessert contexts. I found one extremely decadent recipe (which will eventually find its way to this blog), but considering I needed two cheesecakes, I knew I wouldn’t have the time needed for that beauty. But this cake was still absolutely delicious! 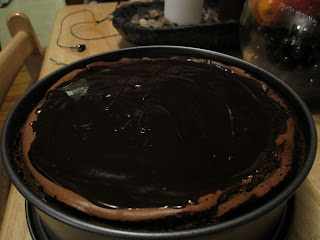 The ganache was an addition on my part: I felt the cake could use a little extra “oomph” in presentation. I used my new cheesecake pan for this one, and I admit it’s not as good as my old pan (which I used in the next recipe). The new pan has an all-metal frame, whereas my old one has a glass bottom. The consistency and baking time was right on target with the old pan, whereas the new pan had a narrower, taller result; not quite my style for a classic cheesecake (as seen below). 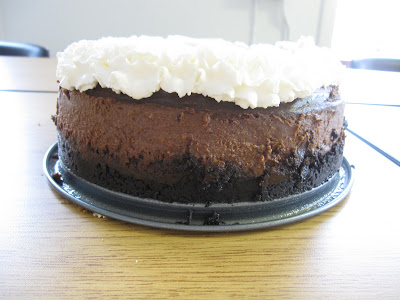 Rich Kahlua Cheesecake with Dark Chocolate Ganache and Whipped Cream
Adapted via AllRecipes
Yields: 10 - 12 servings
Ingredients
Chocolate Graham Cracker Crust:
- 1 cup chocolate cookie crumbs
- 1/4 cup butter, softened
- 2 tablespoons white sugar
- 1/4 teaspoon ground cinnamon
Chocolate Cappuccino Cheesecake:
- 3 (8 ounce) packages cream cheese, softened
- 1 cup white sugar
- 3 eggs
- 8 (1 ounce) squares semisweet chocolate (I used Baker’s Chocolate)
- 2 tablespoons whipping cream
- 1 cup sour cream
- 1/4 teaspoon salt
- 2 teaspoons instant coffee granules dissolved in 1/4 cup hot water
- 1/4 cup coffee flavored liqueur (I used Kahlua)
- 2 teaspoons vanilla extract
Dark Chocolate Ganache:
- ½ cup heavy whipping cream
- 1 cup semisweet chocolate chips
- 2 tsp instant coffee granules
Directions:
For Crust: Preheat oven to 350 degrees F (175 degrees C). Butter one 9 or 10 inch springform pan. Set a 9x11 baking pan filled halfway with water onto the bottom rack of the oven. Combine the chocolate wafer crumbs, softened butter, 2 tablespoons white sugar, and the cinnamon. Mix well and press mixture into the buttered springform pan. Bake in preheated oven for 8 to 10 minutes. Place on a wire rack to cool.
For Cake: Melt the 8 ounces semisweet chocolate with 2 tablespoons whipping cream in a pan or bowl set over boiling water, stir until smooth. Set aside.
In a medium sized bowl beat the softened cream cheese until smooth. Gradually add 1 cup white sugar mixing until well blended. Add eggs, one at a time. Beat at low speed until very smooth. Add the chocolate mixture to the cream cheese mixture and blend well. Stir in sour cream, salt, coffee, 1/4 cup coffee liqueur, and vanilla; beat until smooth.
Pour mixture into the prepared pan. Bake in the center of oven at 350 degrees F (175 degrees C) for 45-60 minutes (will vary based on your oven and pan size/shape - this new pan took over an hour given its depth). Center will be soft but will firm up when chilled. Do not over bake. Leave cake in oven with the heat turned off and the door ajar for 45 minutes. Remove cake from oven and allow to cool for an additional 30 minutes.
For Ganache: place semisweet chocolate chips and espresso powder in a glass bowl, and set aside. Heat heavy cream in a small saucepan over medium heat, and remove once at a boil - pour over the chocolate chips and allow to sit for at least 1 minute. Slowly begin whisking the mixture from the center, and gradually work outwards (this, by the way, is one of my FAVORITE ways of working with chocolate - the transformation is always so gorgeous). Once fully incorporated, allow to cool for 10 minutes, then pour over the cheesecake. Cool the cake for 8 hours or up to overnight. Serve with whipped cream.
______________________________________________

I'd made this eggnog cheesecake once before, and remembered it being a huge hit. There’s something beautiful in the way cream cheese and eggnog complement one another, and creates a cake with a silky texture yet complex flavor profile. In addition to nutmeg, a splash of dark rum and cloves created the dessert likeness of a cup of eggnog, and was without a doubt the favorite of the two cakes (I also credit this to the difference between the pans). 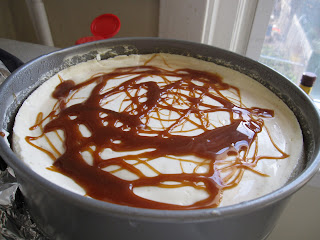 Inspired by a different Bon Appétit recipe I’ve been eyeing for quite some time, I chose to add a sour cream topping with a quick caramel sauce that became super dark (I was doing dishes, lost track of time, and poured in the heavy cream just before the sugar’s burning point – phew!) The overall result was gorgeous, and has convinced me to buy a second of my original pan. The new one won’t go to waste, naturally, but the old one will be my go-to nonetheless. Oh, and did I mention this cake was unbelievably delicious? Enjoy! 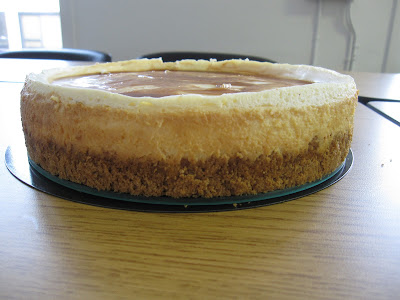 Spiked Eggnog Cheesecake with Sour Cream Topping and Caramel Sauce
Adapted via AllRecipes
Yields: 8 - 10 servings
Ingredients
Graham Cracker Crust
- 1 cup cinnamon graham cracker crumbs (I used Cinnamon, but plain works fine)
- 2 tablespoons white sugar
- 3 tablespoons melted butter
Eggnog Cheesecake:
- 3 (8 ounce) packages cream cheese, softened
- 1 cup white sugar
- 3 tablespoons all-purpose flour (I omitted this, and it made little difference)
- 3/4 cup eggnog
- 2 eggs
- 2 tablespoons rum (I used Myer’s Rum)
- 1 pinch ground nutmeg
- 1 pinch ground cloves
Sour Cream Topping:
- 1 (16-oz) container sour cream
- 2 – 3 tbsp sugar
- 1 pinch ground nutmeg
Caramel Sauce:
- ½ cup granulated sugar
- ¼ cup water
- 1 tbsp light corn syrup
-1/2 cup heavy cream
Directions
For Crust: Preheat oven to 325 degrees F (165 degrees C). In a medium bowl combine graham cracker crumbs, 2 tablespoons sugar and butter. Press into the bottom of a 9 inch spring form pan. Bake in preheated oven for 10 minutes. Place on a wire rack to cool.
For Cake: In a stand mixer, combine cream cheese, 1 cup sugar, flour and eggnog; beat until smooth. Blend in the eggs one at a time, then add the rum and nutmeg. Pour mixture into cooled crust. Bake in preheated oven for 50 minutes (will vary based on your over and pan size/shape), or until center of cake is barely firm to the touch.
For Sour Cream Topping: While the cake is baking, whisk together the sour cream, sugar and nutmeg. Pour the mixture over the top of the baked cheesecake and bake it for another 10 minutes. The top layer should look set. Turn the oven off and let the cheesecake to cool in the oven for 45 minutes to an 1 hour with the door ajar. Chill for 8 hours or up to overnight.
For the Caramel Sauce: The day you plan to serve the cake, make the sauce. Bring the first three ingredients to a boil over medium heat, then let boil until the mixture begins to turn a golden amber, about 8 to 10 minutes (this time can vary, so be sure not to walk too far away from the stove). As soon as it becomes amber, pour in the heavy cream - it will bubble vigorously. Once settled, whisk the caramel until fully incorporated and smooth. Allow to cool for 5 minutes, then drizzle over the top of cake (try not to eat the caramel before doing so, and trust me - this is a difficult temptation).
Posted by Anne Gregory at 6:47 AM