And The Baker Said "Let There be Cheesecake!" 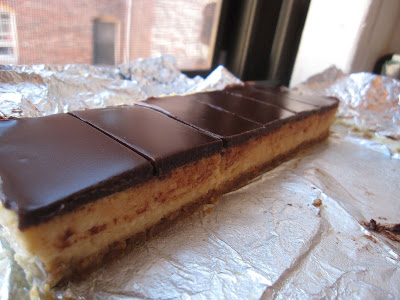 Cheesecake...dulce de leche...do you need to read the rest of this post to be convinced that you must make these? Let us consider the pros and cons. The pros: a rich texture of cream cheese with a buttery graham cracker crust, the sinful addition of dulce de leche, and a glossy layer of chocolate to top it all off. The cons: that these are just photos and you are not eating a piece this very second. I baked these squares for my coworkers at From the Top, and an clean pan was returned to me within hours of its arrival at the office. In other words, I highly recommend this recipe for all lovers of cheesecake, and possibly to those who have an aversion towards this classic dessert as well. It's just that good. 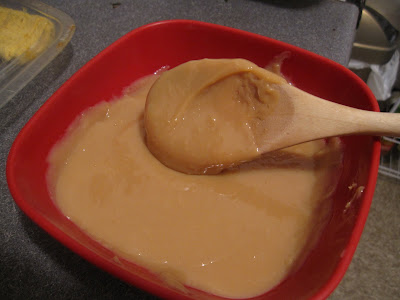 There is nothing more beautiful than dulce de leche. A simple ingredient, it has the capacity to transform any dessert from average to extraordinary. I always make my own based on David Lebovitz's recipe, and it turns out perfect every time (see above). The traditional method of preparation is boiling a can of sweetened condensed milk over the stovetop. This method seems particularly dangerous when one considers it could become a volatile procedure. The oven method is my preference, and has always produced the desired. That bowl of dulce de leche was extremely difficult to set aside to complete the recipe. 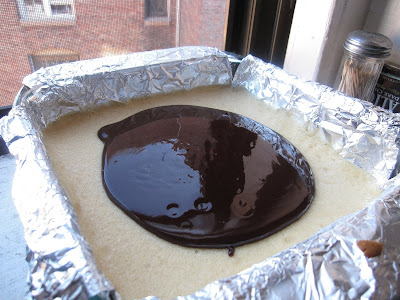 It is regrettable that cheesecake has not received due recognition on this blog considering it is a specialty of mine. But I do have one very special recipe in mind that will soon grace the archives of this site (it's a surprise, so stay tuned!). As far as this recipe is concerned, it takes a slightly different route than your traditional cheesecake: it calls for unflavored gelatin. Being the purist I am, this ingredient was one I initially opposed. Yet one of the setbacks in making cheesecake squares is their lack of stability. The addition of gelatin is a quick fix for said problem, and certainly proved its point with these squares. 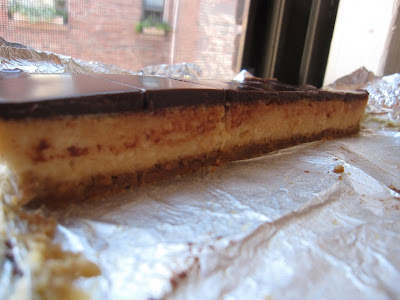 Finely grind crackers with sugar and a pinch of salt in a food processor*. With motor running, add butter, blending until combined. Press mixture evenly onto bottom of baking pan. Bake 10 minutes, then cool in pan on a rack 5 minutes.

*If you don't have a food processor (like me), then grinds the crackers, sugar, and salt in a blender. Once done, place in a bowl and mix in the melted butter (much less of a mess this way)

For Cake: Sprinkle gelatin over milk in a small bowl and let stand 2 minutes to soften. Beat together cream cheese, eggs, salt, and gelatin mixture in a bowl with an electric mixer at medium speed until well combined, about 2 minutes, then stir in dulce de leche gently but thoroughly. Pour filling over crust, smoothing top, then bake in a hot water bath (I was able to fit mine in a 9×13-inch baking pan) in oven until center is just set (shake the pan gently to test for this), about 45 minutes.
Once done, turn off the oven and leave the cheesecake inside for at least 1 hour (this will prevent the unseemly crack notorious to all cheesecakes), then remove from oven and let cool on a rack for an additional 45 minutes to an hour. Chill, covered, at least 6 hours.
For Glaze: (within 2 hours of serving) Heat all glaze ingredients in a double boiler or a small metal bowl set over a saucepan of barely simmering water, stirring until smooth, then pour over cheesecake, tilting baking pan to coat top evenly. Chill, uncovered, 30 minutes.
Lift cheesecake from pan using foil overhang and cut into 1-inch squares with a thin knife, wiping off knife after each cut. (This is crucial! I had a glass of water next to me while cutting the squares, and I dipped the knife after each slice) 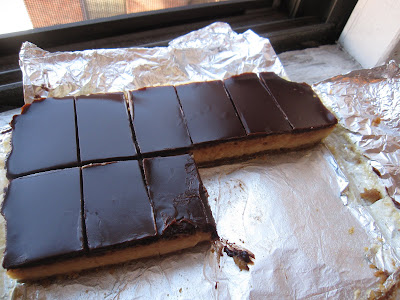 Note: Cheesecake (without glaze) can be chilled up to 3 days. If glaze is chilled overnight, it will make it difficult to cut
Posted by Anne Gregory at 9:28 PM

This creation sounds fabulously rich and delicious. I will have to try it sometime!