These Are a Few of My Favorite Things...

As I've mentioned before on this blog, I'm not the biggest fan of sweets, but this cake possesses a few irresistible favorites of mine for when I do choose to indulge. I went to Cheesecake Factory a few weeks ago to see firsthand a cheesecake I had been told about by friends as well as read about online: Stefanie's Ultimate Red Velvet Cheesecake. When the waiter returned with the behemoth slice of cake, I asked if there was anyone on site I could possibly speak with to discuss the process behind making such a cake. I almost fell out my chair when he told me they were shipped, frozen, from California! Now folks: this is no joke to a baker, and I knew at that very moment that I had to somehow reproduce this cake. 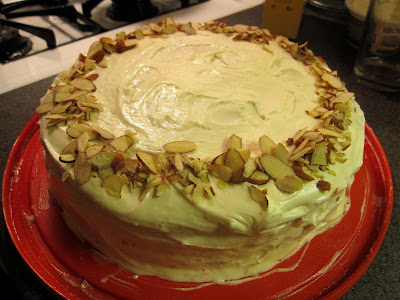 Having made it, I now understand why these cheesecakes are shipped frozen. This is an extremely difficult cake to assemble, and would be far too time-consuming for a chain restaurant like Cheesecake Factory to consistently produce. Mind you, the cake was still very good at the restaurant, I just have to have my own standards. Nonetheless, I highly respect the concept behind the cake: for every slice purchased, 25 cents is donated towards Feeding America, a foundation that provides food for over 37 million Americans per year. 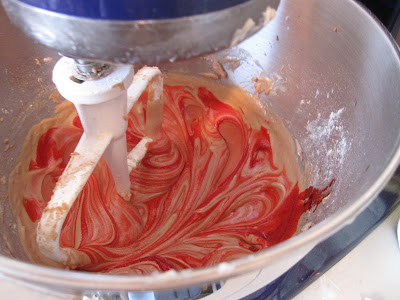 Anyways, about my own attempt at this beautiful cake. I baked this cake for a farewell party being held for a friend of ours moving to Canada. I knew there would be a decent amount of people, so I chose this cake as it is not meant for small functions. This cake was still smaller than the one available at Cheesecake Factory, but considering it took 3 of us to tackle one slice, I preferred making a cake that wouldn't be quite as daunting. 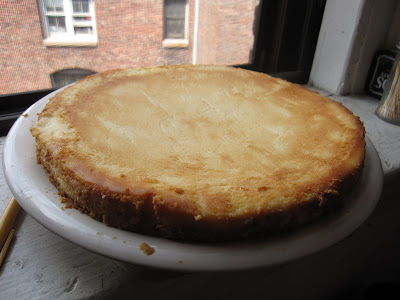 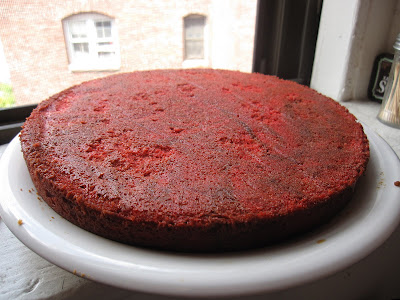 Layer 2 - the Red Velvet Cake
Basically its a great cake: the textures and flavors of the two cakes marry beautifully. But be warned, this is not an easy recipe. Cheesecake alone is difficult to master, from achieving the right texture to preventing unsightly cracks from forming once the baking is done. Slicing a cheesecake can become messy...slicing one in half is nearly impossible. I recommend having a tall glass of water nearby - a wet knife slices much cleaner. Granted, another option is to simply double this recipe and skip the slicing altogether (but that would make a MUCH bigger cake; save this concept for large parties/gatherings). I found this recipe, after having conducted a thorough online search, at a blog called The Changeable Table. 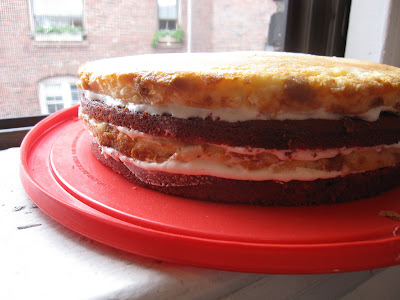 Red Velvet Cheesecake with Cream Cheese Frosting
adapted from The Changeable Table
Serves 10 - 12
Ingredients:
Cheesecake:
Red Velvet Cake
Cream Cheese Icing
Directions:
Spray two 9” round cake pans generously with PAM, or grease with shortening. Trace bottoms of pans onto parchment paper, cut out, and place in bottom of pans. Set aside.
For the cheesecake: Cream together cream cheese, sugar, and cornstarch with mixer. Add eggs, one a time, then the vanilla - beating until smooth. Add cream and beat in just until combined - don’t overmix. Pour into one of prepared pans. Bake at 350 degrees for about 1 hour and 15 minutes - watching closely near end of baking time. One done, turn off the oven and let the cake sit in the cool oven for an hour, then place in refrigerator for about 2 hours. Run knife around outer edge, tapping pan to remove cheesecake onto the palm of your hand. Set in refrigerator until cold
For the cake: Cream butter, shortening, and sugar. Add egg and cocoa, making sure to scrape the bowl with a spatula. Combine the flour and salt in a separate bowl, and buttermilk and food coloring in another bowl. Alternate between the flour and buttermilk mxtures - beating well. Sprinkle baking soda over batter, then pour vinegar and vanilla over the top. You’ll see it foam slightly. Fold into batter until well mixed. Pour batter into the other prepared pan. Bake at 350 degrees for about 25-30 minutes, or until it tests done. Cool, then remove cake from pan. Using large serrated knife, cut this layer in half when cooled.
For the frosting: Beat cream cheese and butter together until fluffy. Add sugar and salt, then cream & vanilla. Continue to beat until smooth and it forms peaks. Set aside.
For assembly: Place first half of cake layer onto serving plate (after having removed the parchment paper). Spread generously with a layer of frosting. Carefully slice cheesecake in half in the same way as the red velvet layer (remembering to wet the knife after each slice), placing one half on top of red velvet cake & frosting. Add another layer of frosting. Repeat layers. Carefully spread frosting around outer edge of cake to prevent crumbs. Now frost top of cake. Using remaining frosting, place in pastry bag with decorative tip. Pipe edge on top and bottom.
*Note: This frosting contains butter, and will melt quite easily in a warm workspace. Work quickly, then place the finished cake into the refrigerator until serving. 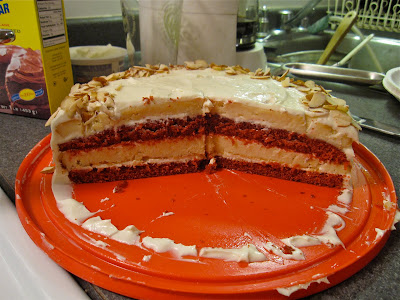 Confession: I was not fully satisfied with this cake. Everyone who had the opportunity to try it loved it, even claimed it was the best cake I've ever made. Yet I had been pretty sick that week, so I felt my own personal standards weren't met (patience and food poisoning are a rough match). As such, there will probably be another (more beautiful) installment of this cake eventually. Now I just need to find the right event for it...