A Creamy Alternative to Gluten 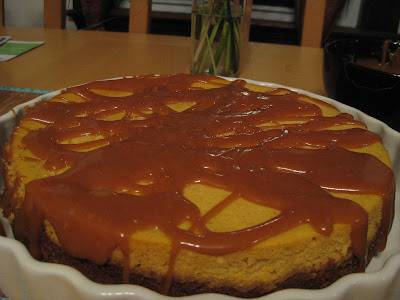 Having recently experimented in baking with vegan alternatives, the concept of a gluten-free dessert was far less intimidating. Granted, there were a number of considerations I had to take into account (including the fact that, unless labeled “pure”, vanilla extracts and flavorings contain gluten!), but the majority of the staples were still in play (i.e. eggs, milk, sugar, etc.).  As such, I was able to choose a simple solution with a decadent result: Pumpkin Spice Cheesecake with a Caramel Sauce and Gluten-Free Gingersnap Crust. 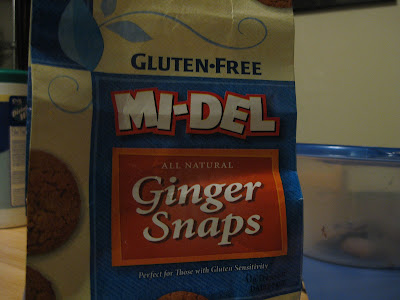 Gluten intolerance, known as Celiac Disease, is a relatively new concept in American diagnostics, and is believed to effect up to 1 in every 105 persons in the United States. It is an autoimmune disease where the body reacts to the appearance of gliadin, a glycoprotein found in heat products, and results in the degeneration of intestinal villi. This consequently interferes with the absorption of nutrients, inducing the symptoms of fatigue, weight loss, anemia, etc (Wikipedia). The party I baked this cake for had not one but TWO present with Celiac, so I made sure to do my homework.

Cheesecake is a specialty of mine, probably given that it is my favorite. Whether in its simplest form (New York Style) or extremely complex (Red Velvet Cheesecake), it is a dessert that never fails to please.
Notes: I used a 9-inch spring-form pan, rather than the 8-inch originally called for. The caramel sauce I used is from a previous recipe I posted a while back - Dorie Greenspan knows her stuff ;-)
Pumpkin Cheesecake with Caramel Sauce and a Gluten-Free Gingersnap Crust
Adapted via Food.com
Yields: 8 - 10 Servings
Ingredients
Gluten-Free Gingersnap Crust:
- 1 1/2 cups MI-DEL Gluten-Free gingersnap cookies, finely crumbled
- 5 tablespoons butter, melted
- 1 tablespoon sugar
Pumpkin Cheesecake
- 1 cup sugar
- 3 (8 ounce) packages cream cheese (at room temperature)
- 1 teaspoon vanilla (make sure it’s PURE, or else it might have gluten!)
- 1 cup canned pumpkin
- 3 large eggs (at room temperature)
- 1/2 teaspoon cinnamon
- 1/4 teaspoon nutmeg
- 1/4 teaspoon allspice
Caramel Sauce
- 2 cups sugar
- ½ cup water
- 1 ½ tablespoons light corn syrup
- 2/3 cup heavy cream
- 2 tablespoons unsalted butter, at room temperature
Directions:
For crust: Preheat oven to 350 degrees F. Wrap tin foil around the outside of a 9-inch spring-form pan, and spray lightly with cooking spray. Combine the gingersnap crumbs with the melted butter and sugar in a medium bowl. Stir well enough to coat all of the crumbs with the butter. Press onto the bottom and halfway up the sides of the pan. Bake the crust for 5 – 7 minutes,  then set aside until you are ready to fill it.
For cheesecake: In a large mixing bowl combine the cream cheese, sugar, and vanilla. Mix with either the paddle attachment (in a stand mixer) or with an electric mixer until smooth. Add the pumpkin, eggs, cinnamon, nutmeg and allspice and continue beating until smooth and creamy. Pour the filling into the pan. Bake for 60-70 minutes. Once the center has almost set, turn off the oven and leave the cheesecake inside for an additional hour.
For caramel sauce: Combine the sugar, water and corn syrup in a medium heavy-bottomed saucepan, stirring just to combine the ingredients. Place the pan over medium-high heat. Heat, without stirring, until the caramel turns deep amber, 5 to 10 minutes depending on the size of your saucepan and the intensity of the heat. As the sugar is caramelizing, wipe down any splatters on the sides of the pan with a pastry brush dipped in cold water. To test the color of the caramel, drop a bit onto a white plate. Don’t be timid about the color – if it’s too pale, it won’t have much flavor.
Lower the heat a bit and, standing back from the saucepan, add the cream and butter. When the spatters are less vehement, stir to calm down the caramel and dissolve any lumps. Let cool for a bit, then pour over the top of cheesecake – cut with a knife, dipped in after water every slice to prevent a mess, and enjoy!
Posted by Anne Gregory at 7:31 AM