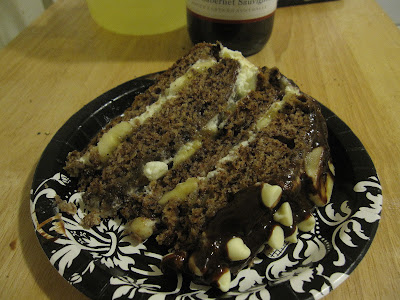 We all reminisce on those days when the simple things were all that mattered: swings sets, grilled cheese sandwiches, snow angels, etc. One favorite staple of my childhood was chocolate banana pops. Granted, that favorite confection has been revisited with chocolate fondues and such, but it's the concept of marrying chocolate with bananas that I'm aiming for here. It's simple, yet irresistible. When I discovered that my friend Zach loves bananas, I knew I had to find a way to utilize this flavor combination for his birthday cake. As such, I unearthed this amazing recipe: Chocolate Banana Cake with White Chocolate Frosting and Chocolate Ganache. 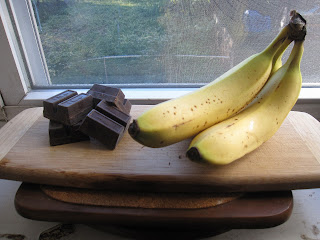 This recipe has been on my "to-do" list for quite some time. The flavor profiles are profuse, making it a more interesting, colorful dessert than its cousin - the chocolate banana pop. Yet the concept of chocolate and banana is the inspiration here, and both white and dark chocolate have keys roles in this recipe. The cake, a spin on your classic sour cream chocolate cake, is extremely rich and delicious. I do have a small confession - the recipe calls for 3/4 cup of butter, and being highly distracted by the beautiful October morning and scent of fall (my favorite season) I used a whole stick! The cake was still amazing, so I can only credit one of my favorite Southern butter lovers, Paula Deen: “Butter is a very, very beautiful thing." 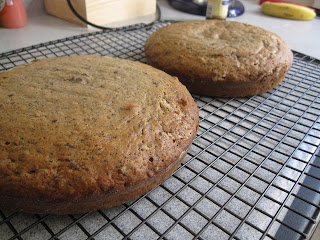 This is a highly labor intensive cake, and requires a large amount of downtime (for allowing the cakes to cool, the frosting to set, and more). If the idea interests you, though, this cake would be just as effective in a deconstructed form: cake slices with dollops of frosting and ganache drizzled on top. I mention this because I myself encountered difficulties in assembly - the frosting, have a whipped cream base, is very fragile and doesn't set quite as well as a cream cheese or buttercream frosting. I believe this was partially my fault from over-beating the cream. Additionally, the ganache makes the cake a bit top heavy, so balance also becomes an issue. The photo below illustrates my quandary - nonetheless, this cake is DELICIOUS and I highly recommend it to anyone who misses the classic from their childhood. 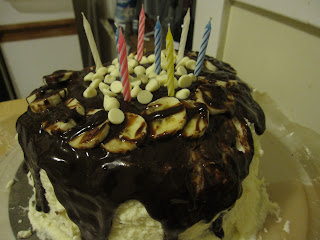